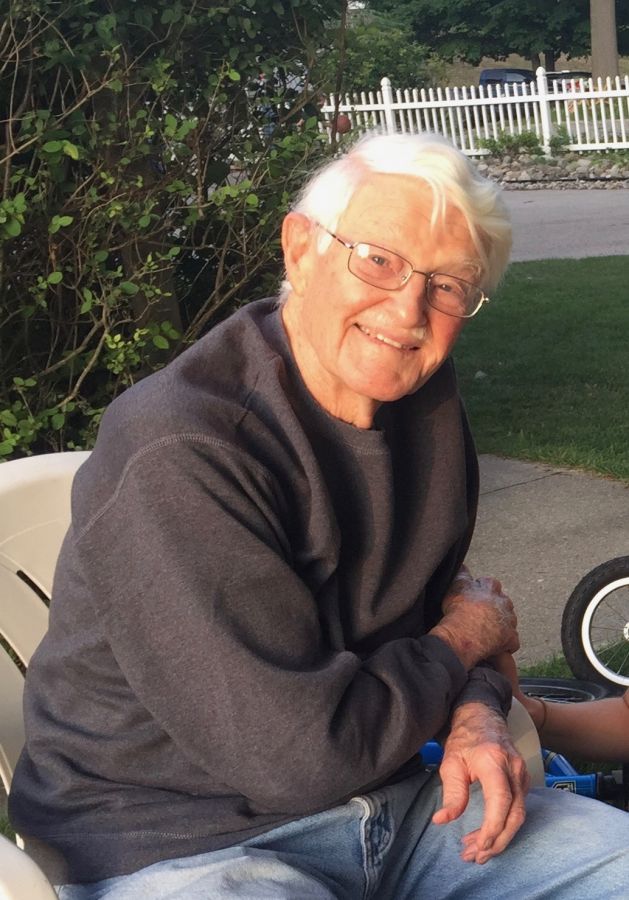 Mr. Herbert Samuel Hoeker, age 97, passed away Friday, May 6, 2022. He was born in Muskegon, MI on May 25, 1924 to John & Ruth (Langeland) Hoeker. He attended Muskegon High School where he was 1st chair cornet for three years. Herb served his country in the US Army during WWII and fought during the Battle of the Bulge in Liège, Belgium. Conditions were abysmal, he froze his feet, was removed from active duty and was hospitalized in England. Once recovered, he guarded POWs in France and played cornet with the Air Force Band for the duration of the war. Herb returned home and married the former Elinor Henry on April 24th, 1948. Herbert was employed as a distribution Supervisor for the Michigan Consolidated Gas Company where he worked until his retirement. Herbert was an active member of First Presbyterian and he sang in the choir under his favorite director & friend; Ellen Pool. Herb played cornet with the Pentwater Community Band & the Muskegon Community Band in the summer. In the winter, he played in the Manatee County Community Band. He was a great lover of & very proficient in music. But his family will remember him for his amazing carpentry & mechanical skills. It felt like he could fix anything! If you had something "Herbed", it was better than the original. Besides his family, music and constructing things, Herbert loved swimming, boating & living near Lake Michigan.
SURVIVORS
Children-Timothy Hoeker of South Carolina, Jane (John Pierre Rudell) Bell of Muskegon, Susan (Tyler) Newton of Muskegon; grandchildren-Aaron (Amanda) Hoeker, Ethan (Katie) Hoeker, Megan (John) Reelman, Colin (Julie Emmick) Billingsley, Jillian (Calder) Burgam, Emily (Josh Wilson) Bell, Lauren (Bryan) Kulzycki; great-grandchildren- Mason, Erynn, Kendon, Jordan, Haiden, Karsen, Jack, Emma, Cienna, Miah, Hollen, Mea, Brennan and Trevor; brother-in-law Peter Zylman and sister-in-law Dorothy Anderson. He was preceded in death by his wife Elinor and his parents and his sister Janis Picard. The family would like to thank the wonderful staff at the Hume Home, Hospice of Michigan helpers (especially Ashley Patton), Mercy Health Geriatrics (especially Cacey Miller) and our friends & neighbors for helping us through the challenges and for loving Herb & Ellie.
SERVICE
A private family service will be held. Please visit www.clockfuneralhome.com to leave a memory or sign the online guestbook.

Plant a tree in memory of Herbert

Our thoughts and prayers are with you. 3 trees were planted in memory of Herbert Samuel Hoeker Plant a Tree

The attached photos are added to the memorial of Herbert Samuel Hoeker to help share their legacy.