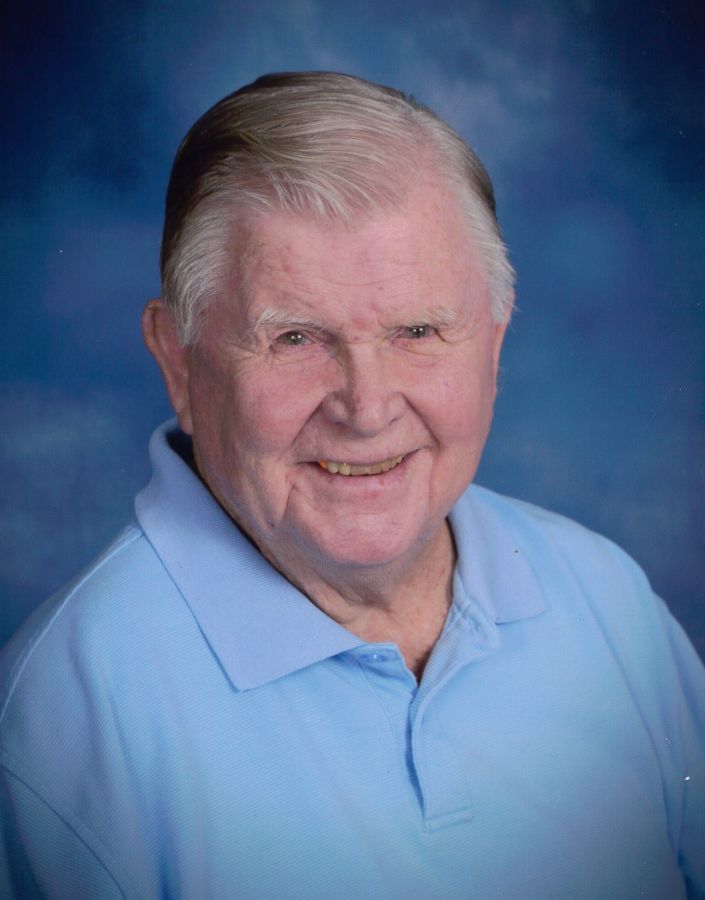 Kenneth Wayne Dulyea Sr. (Wayne), died on Monday, August 17, 2020 at Sanctuary at the Oaks in Muskegon, Michigan. Wayne was born the fourth of six children to Glen H and Diana (Tripp) Dulyea on August 1, 1925. He lived his entire life in Muskegon with one interruption during the second World War. Shortly after graduating from North Muskegon High School in 1943, Wayne and the former Joyce Eyestone were married. By October of 1944, he was a soldier on his way to Europe with an artillery battalion. On April 22, 1945, between midnight and 6:00 am, Battery B of the 398th Armored Field Artillery fired 25 rounds. This was Private First Class Wayne Dulyea's last combat activity in Europe. Three days later his son, Kenneth Wayne Dulyea Jr. was born. Eight months later, on the eve of Wayne's return home, The Muskegon Chronicle published an article with the lead: And He'll Say, "Hello Son" For First Time.

After the war, Wayne served an apprenticeship at Buerle's Tool and Die in Muskegon, gained his journeyman's card, then went to work for Tri-City Tool. He later applied to work for Howmet in Whitehall. Management told him there was no one to do machining for them locally. That was the impetus for Wayne to go into business with Warren Hutchison. Together they rented a former foundry at the corner of Muskegon and Mears in Whitehall, obtained machines that were "brought over on the ark", and went into business machining for Howmet. They made their first dollar on July 15, 1954 and were successful enough that Viking Tool and Die moved into the larger facility on Colby Road in 1960 where it remains today.

Wayne enjoyed deer hunting, even though he was seldom successful; until the day he woke from a nap in the woods to discover a buck standing in front of him (a standing joke in the deer cabin). He was a long-time member of the White Lake Golf Club who finally scored a hole-in-one after he turned 80 years old. Together, Wayne and Joyce supported the Community Foundation for Muskegon County and were life-long supporters of First Christian Church in Muskegon. Wayne's devotion to Joyce was exemplary during her struggle with Alzheimer's disease; his faith in God was strong in the face of death. He wanted little in terms of a ceremony but for his family to have a party after he died. In this time of quarantine, we will see what we can do, Dad.

The family thanks the staff and nursing staff of Sanctuary at the Oaks for the care they provided to Wayne.

Thursday, August 20, 2020, 11:00AM at Sunrise Memorial Gardens Cemetery with Rev. Dr. Teresa Ellen Dulyea-Parker officiating. Due to Covid-19, please remember face masks and social distance guidlines. The family will be at the grave all others will be at the road. MEMORIAL: In lieu of flowers, please consider contributions in Wayne's name to Harbor Hospice or to the Community Foundation of Muskegon. Please visit www.clockfuneralhome.com to leave a memory or sign the online guest book.

Wayne and Joyce Dulyea and family were the best neighbors one could have. They had a swimming pool and on hot days our kids were invited to come and cool off. Barry was one of our kids' favorite baby sitter. He taught them how to play football in our living room. Brad and I graduated from MCC together, the first class to graduate from the then new building on Quarterline Road. Joel continues to be fun as we read of his stories in the Senior News each month. His last piece was so dear telling of his visit with his dad. Teresa attended school with our kids from kindergarten until 10th grade when they moved to Montague, the school district I worked for. She had been a cheerleader at R-P and cried during her first pep assembly at Montague, where she did very well ultimately graduating as valedictorian of her class. When Ken and Elaine moved to Montague, I got to be with Bobby, who I knew as a little one that Teresa baby sat back in our neighborhood. And I cannot forget dear Barbara who worked for us at DJ's Playground. She was so much fun to work with because she sang most of the time while serving ice cream. Even Fern and I had a connection inasmuch as she also worked at Montague Schools and we ended up in a swim group together at the YFCA. Wayne certainly loved his family and lovingly cared for Joyce taking her to appointments and so on. May the love that he showed for all of you continue to bless you all as you remember all of the happy times.
Katy Neumann, still on Bard Road.

Ken & family. My condolences on your loss. Wayne was a positive influence on me early in my career at VTE. If you made a mistake it was OK as long as you learned something from it. (and it didn't happen again!) Being an apprentice on second shift, I was quite often tasked with working on Club Tree. Wayne had a never give up attitude. Good Times!
John C Ten Brink
Viking Tool & Engineering
29 Years, Retired

Wayne gave the best hugs! So fortunate to have met him at first Christian church, and then to be a guest of his in Sarasota for a full week.A true gentleman. He will be greatly missed. From Toni Rae Gurn

Such a good and caring man! He will be missed by so many. Rest in God's hands dear one.

He was a great happy guy only knew him for for a short time met Wayne at church He always sat just inside the front door as a greeter he will be greatly missed. Love you Wayne

The attached photos are added to the memorial of Kenneth Wayne Dulyea to help share their legacy.

Thank you for sharing your memory of Kenneth