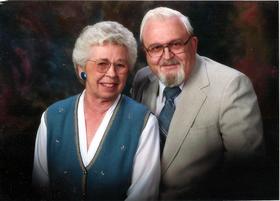 Barbara Elizabeth Jesson (Buehler), 89, of Muskegon passed away August 10, 2017 in Grand Rapids. Mrs. Jesson, the widow of Dr. Robert M. Jesson, was born March 24, 1928 in Ferndale, Michigan. She grew up in the Detroit suburb and graduated from Harper Hospital School of Nursing and joined the hospital staff as a registered nurse, which is where she met her husband. The couple married June 9, 1951 then moved to Louisiana and Texas, where Mrs. Jesson worked with world-renowned heart transplant pioneer Michael DeBakey. The couple moved to Dr. Jesson's hometown of Muskegon in the late 1950s and made it home. Mrs. Jesson took a break from professional nursing, devoting her time to family and charities including Hackley Hospital Auxiliary and the Red Cross Blood Bank. She was a longtime member of Samuel Lutheran Church of Muskegon. She also served as the honorary neighborhood nurse, taking care of many a banged-up or bruised child's simple injury, triaging bee stings, sprains and broken bones, while calming many a worried parent. She returned to formal nursing once her children were grown, working in the Hackley Hospital Outpatient Clinic for nearly 20 years.

Mrs. Jesson was preceded in death by her husband of 62 years, Dr. Robert M. Jesson; her parents, Herbert Frederick and Marion Hamilton Buehler; her brother, Herbert F. Buehler Jr. of Flushing, Michigan; an infant son, Paul Jesson; and her daughter, Signe Jesson of Muskegon, and daughter-in-law, Lorie S. Jesson of Grand Rapids. She is survived by her son, Erik H. Jesson (Barbara Watters) of Grand Rapids; daughter, Kristin Bucci (Roy) of New Jersey, daughter, Carlyn Johnson of Grand Rapids; two grandchildren, Matthew Bucci and Amanda Bucci, both of New Jersey; and three nieces and a nephew and their families.

A memorial service will be held Saturday September 9, 2017 at the Clock Funeral Home in Muskegon, Michigan. Visitors may pay their respects beginning at 10 a.m. with service beginning at 11 a.m. Burial will be private.

The attached photos are added to the memorial of Barbara E. Jesson to help share their legacy.